Abstract: Initially, robots were developed with the aim of making our life easier, carrying out repetitive or dangerous tasks for humans. Although they were able to perform these tasks, the latest generation of robots are being designed to take a step further, by performing more complex tasks that have been carried out by smart animals or humans up to date. To this end, inspiration needs to be taken from biological examples. For instance, insects are able to optimally solve complex environment navigation problems, and many researchers have started to mimic how these insects behave. Recent interest in neuromorphic engineering has motivated us to present a real-time, neuromorphic, spike-based Central Pattern Generator of application in neurorobotics, using an arthropod-like robot. A Spiking Neural Network was designed and implemented on SpiNNaker. The network models a complex, online-change capable Central Pattern Generator which generates three gaits for a hexapod robot locomotion in real-time. Reconfigurable hardware was used to manage both the motors of the robot and the low-latency communication interface with the Spiking Neural Networks. Real-time measurements confirm the simulation results, and locomotion tests show that NeuroPod can perform the gaits without any balance loss or added delay.

Fig. Block diagram of the entire system. It is composed of the SpiNNaker board, an FPGA-based board, and a 3D-printed hexapod robot frame. 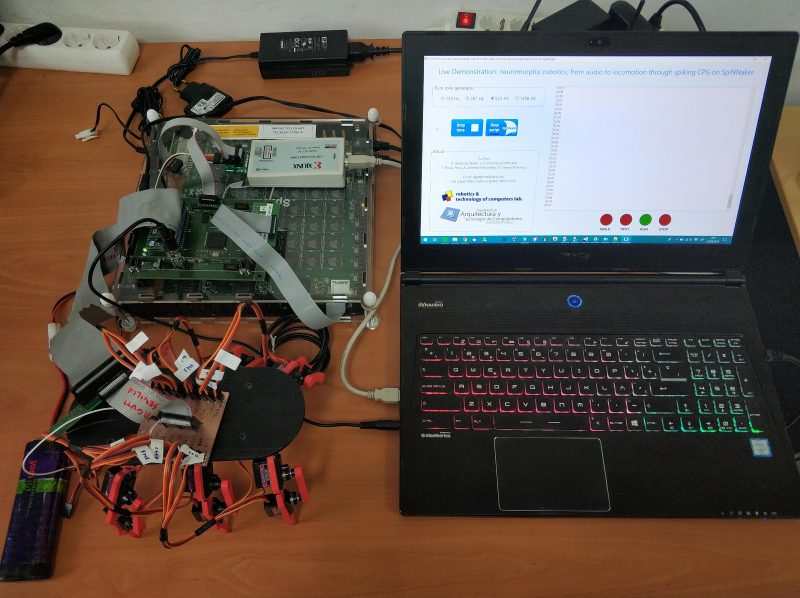