Complex systems developed by Neuromorphic Engineers require interfaces to interconnect them and to connect them to PCs for debugging or other purposes. This milestone was the start point for the development of a set of Address-Event-Representation (AER) Tools under the European Project CAVIAR. We are four different partners working together in the design of a neuromorphic vision system totally based on AER. CAVIAR connects the biggest AER chain at the moment [1]. This chain is composed by a 128×128 retina that spikes with temporal and contrast changes [2], four convolution chips to detect a ball at different distances from the retina [3], four object chips to filter the convolution activity [4] and a learning stage composed by two chips: delay line and learning [5]. To make all this vision system possible, a set of AER-Tools or debugging and interconnection purposes are not only useful, but also necessary.

These AER-Tools are divided into 4 different PCBs with 8 different functionalities, depending on the firmware downloaded to them.

To inject and read events to an AER system, using a PC, a bridge between the AER bus and one PC buses is necessary. To obtain the maximum bandwidth the PCI is nowadays one of the best candidates. Our interface differs from the Rome PCI-AER [6] in several characteristics:

This interface, shown in figure 1, has the following technical features: 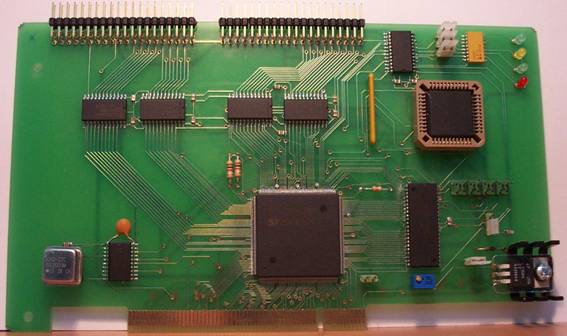 A more portable, easy to use and versatile interface is always valuable. This interface is also designed around a Spartan II 200 and a Cygnal 8051 USB microcontroller, which make it fully configurable. The maximum throughput of the USB interface is 6 Mbits/sec (~187Kevents/sec), which limits the use of this interface for event based communications between the PC and the board. Therefore, this interface receives the control information or frames (bitmaps) from the PC and uses hardware based frame to AER transformations to produce AER events.

The integrated 2 MB 32bit wide SRAM, the SD/MMC slot, the USB connector and the two AER connectors, as shown in figure 2, make this board very attractive to develop an interesting set of AER-Tools. Some of these tools are dependent on a PC while other are not:

This board currently has several available firmwares whose functionalities are the following: 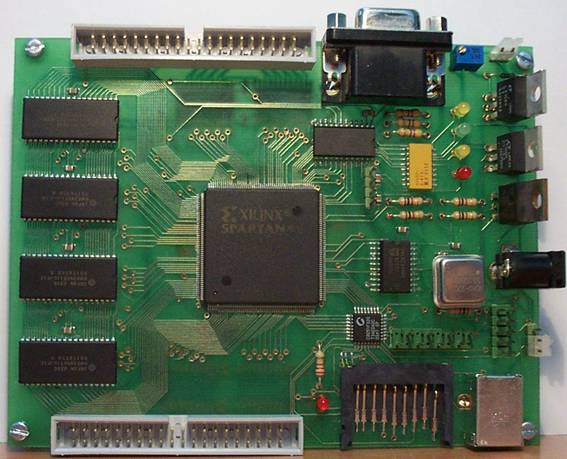 With the mentioned interfaces we can connect a PC to an AER chip and an AER emitter to a receiver.  The last necessary interface should be able to connect many to one and one to many chips or PCs. This interface is called AER-Switch and can perform two different operations:

The AER switch is based on a Xilinx 9500 CPLD. It has 5 AER ports (one input, one output and three bidirectional ports). 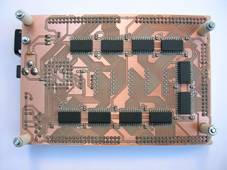 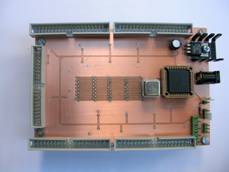 For small event rates and simple operations, a reduced version of the USB-AER has been developed together with Toby Delbruck from INI. This interface allows connecting an AER bus to a PC in both direction (sequencer or monitor). The PCB is based around a Cygnal 8051 microcontroller, with no FPGA.

A good software kit that fully supports this board as a monitor is available.

The supported event rate is around 100Kevents/sec.

A new version that supports High speed USB2.0 and is capable of event rates up to 8Mevents/sec is currently under test.